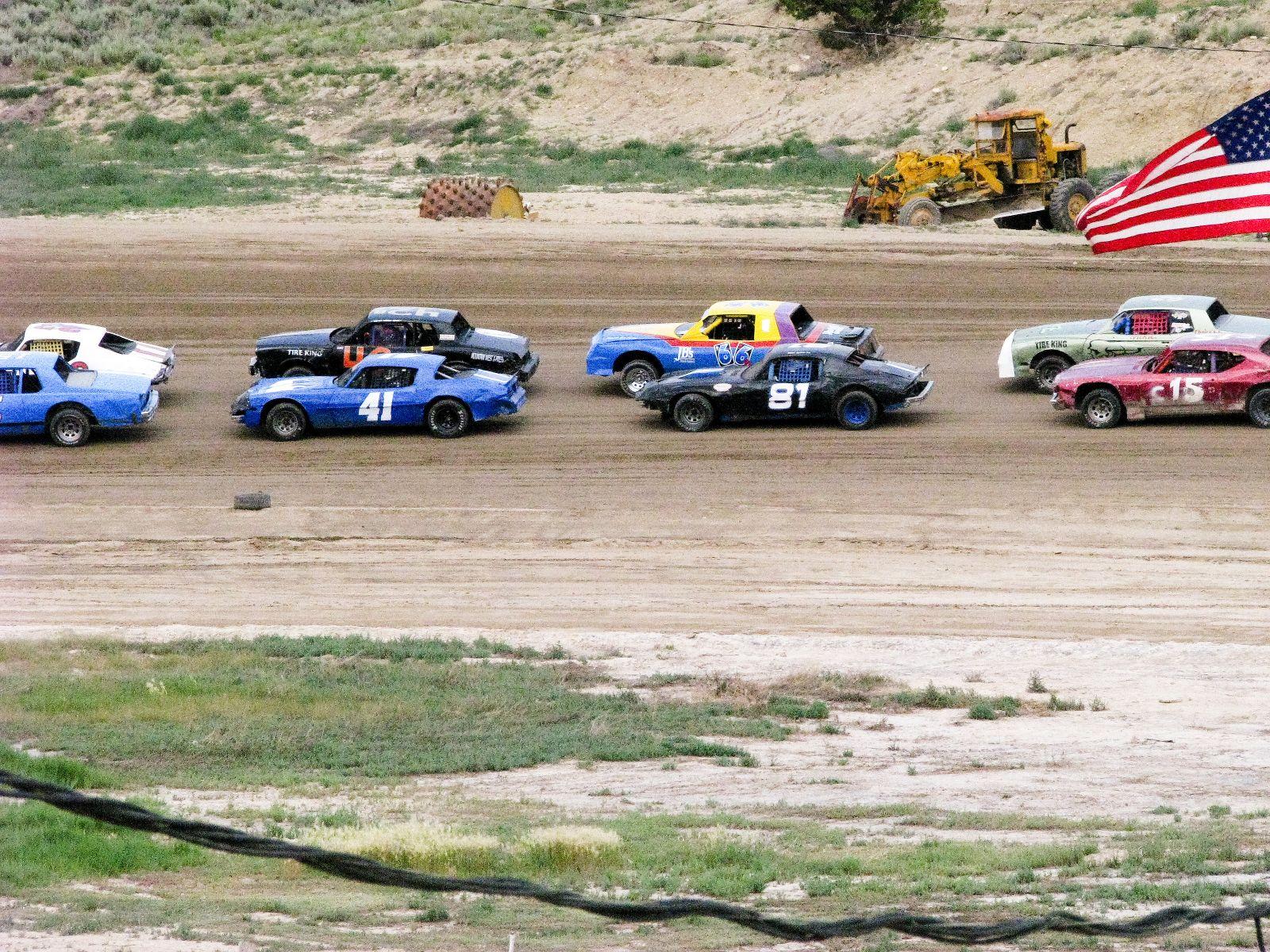 Looking to change up the exterior styling of your Pony? Then why not install a Mustang wing to give your car a more aggressive look

-The Racer-
No special skills are needed. In the sport of drag racing, any licensed driver can participate. Kids as young as 8 years old compete in the CBS7 Junior Dragster series and some as old as 99 race hard down the 1/8-mile dragstrip. Driving skills improve with each race. The full performance capabilities of a vehicle are tested while a driver learns a vehicle’s characteristics.

-The Track-
The dragstrip is a 60 feet wide strip of specially prepared concrete. Safety concrete walls line both sides of the racing surface from the starting area to far beyond the finish line. The starting area also has a concrete surface 150 feet long to withstand the harsh wear from spinning tires. The end of the track has an emergency sand-based run off area.

-The Tree-
A drag race is started using a device called a “Christmas Tree” that stands 42 feet ahead of the start line. As the vehicles approach the starting line the drivers are signaled to stage their vehicles and start the race by watching the colored bulbs light up in sequence.

-More about Reaction Times-
Keep in mind that the tree counts down at .500 second (five tenths) intervals. The reaction time announced is the time that the vehicle took to move off the starting line compared to when the green bulb lit up.

-The Race-
With each racer leaving the start line together, the finish line decides the winner. A series of infrared beams across each lane measure incremental times during the race as well as top speed.

The total time of the race for each lane is recorded and announced as the elapsed time, or E.T., followed by the top speed for each vehicle. The clock starts when the vehicle leaves the start line, not when the green comes on. The reaction time is recorded separately to show how long a vehicle waited to leave while the E.T. shows how long the race was. Adding these numbers together as a “package” will show the mathematical winner every time.

-The Finish Line-
After crossing the finish line, the driver lets off the accelerator and slowly applies the brakes in the coast down area while staying in his own lane. Drivers should avoid skidding. The vehicle in the right lane makes a right turn exit first followed by the left lane. This allows a safe exit for both vehicles. No driver should ever turn around on the track since there may be another pair of vehicles ready to start the next race.

After the vehicles exit the track, they return to their pit area using the return road. Racers can stop along the return road at a station called “Time Slips” where a track official will hand the driver a printed slip that shows the results for both vehicles. The speed on the return road is limited to 10 m.p.h. Once you’re in the pits, please only drive 5 m.p.h.

The basis of competition is in the performance numbers. Drivers perform as consistently as possible while tuning their machines for optimum performance.

“Street legal” vehicles may participate at DTR. If you’re not sure if you can race it at DTR, please email the track and we can verify basic information for you. The term “street legal” means any vehicle that is legal on public streets. While the legal requirements of street vehicles vary, we try to accommodate those that may have minor infractions, i.e. tinted windows, aftermarket exhaust, broken taillight, etc. Our officials don’t enforce vehicle codes but instead they strive to offer the illegal street racer a place to race that is safe, legal and fun.

First, prepare for a day at the drag races. Bring only the essentials including a camera or video (for bragging rights), money for gate entry and lunch, sunscreen, folding chairs to be comfortable in the pits, helmet (required if car is quicker than 13.99 seconds & all motorcycles), long pants, shoes and sleeved shirt (for drivers). Also, if you don’t want to leave something back in your pit space while you race, leave it at home.

Fill up with gas, check out your vehicle for safety and show up at the dragstrip. You will be asked at the gate if you want to race or watch. Racing participants pay $15 (car + driver) and spectators pay $10, children 10 and under are always free. You will receive a “tech card” and need to sign your release form. You’ll be directed to the “technical inspection” lanes where your car will be checked for the basic safety items. Fill out the card; open your hood and trunk for inspection.

Before any vehicle can race it must first pass the basic safety inspection. Things such as tire tread, brakes, safety belts and steering are checked closely. No leaking fluids are allowed. Our SFI Certified tech inspection personnel will assist racers with compliance issues.

Most late model factory original vehicles pass through tech inspection in only a few minutes while some of the highly modified muscle cars require more scrutiny. Approved racing type slicks are allowed since they are safer for the quicker accelerating vehicles. Some street legal racers choose to bring their vehicles in on trailers complete with shade canopies, barbecues and tools for a full day of safe, legal and fun racing at the track.

-Racer Registration-
Once the tech inspector is done checking your vehicle, he will sign it off allowing you to go to the next step at racer registration. All drivers must show a valid state driver license, you will be given a wristband that shows track personnel that you have successfully completed the technical inspection/registration process. Finally, a number is applied to the windows of your vehicle using a white “shoe polish” like marker. That number is used to identify and group the competitors to race control personnel.

-The Pits-
Please see track information on pit parking. Using cones, tires or chairs to mark a space is common and acceptable; however you must be careful not to block fire-lanes or park in someone else’s pit space. While it’s acceptable to work on vehicles in the pits there is no draining of fluids allowed. Vehicles on jacks must use jack stands. Anytime the vehicle is running a licensed driver must be in the driver seat with all safety equipment in place. The speed limit in the pits is 5 M.P.H. really!

Spectators are welcome to walk or even park in the pits but as with all vehicles it’s important that the fire-lanes remain open. Kids are allowed in the pits if supervised by an adult. Only licensed drivers may operate autos, golf cars, motorized scooters and motorbikes.

-The Call to the Lanes-
All dragstrip announcements can be heard in the pits. Please listen carefully as there are several types of races running on any given day. Certain lanes can be designated for a class so it is very important that you know what lanes you are allowed in.

When your group is called you may proceed to the rear of the “staging lanes”. Be sure your wristband is visible and have all loose items removed from the vehicle. As you drive into the rear of the staging lanes a track official will ask to see your wristband and direct you to a lane. This allows the track officials to verify that you have been through tech inspection and to give drivers some instructions if needed.

When you get to the front of the staging lanes another track official (the lane master) may do a quick once over to make sure your wristband is on and that no loose items are in your car and to sure that you are you properly dressed to run the track.

-The Burn Out-
The area directly behind the starting line is called the “water box” and is designed for heating the tires to maximize traction. A track official will signal you to stop when the drive tires are in the water box. On his signal you may “power brake” the vehicle to spin the tires for up to 5 seconds. Properly done, the tires will heat up from spinning and start smoking as you allow the vehicle to move forward out of the water box.

A burn-out is not required and it’s not even necessary for most tires. Vehicles that use racing slicks benefit the most from a good smoky burnout because the hot tires will provide maximum traction on the track. You should drive around the water box if you decide to skip the burn-out.

Only one burn-out is permitted and it cannot be done across the starting line.

Street tires at DTR may not do a water burn-out. Your tires drop water farther up the track making it very dangerous for the faster cars with slicks.

-The RACE-
Immediately after the burnout you may stage your vehicle on the starting line. Once both vehicles are staged, the Christmas tree will be activated to signal the start of the race. A good race will result if you’re able to prevent the tires from spinning, drive straight and let the engine rev to maximum r.p.m.’s before shifting.

It’s common for drivers in quicker cars to “feather” the accelerator to keep the tires from spinning. Excessive spinning of the tires will result in lost traction, slower speeds and can even cause you to lose control of the vehicle with disastrous results. If you feel you’re spinning or losing control you should let off the accelerator and try racing again later.

-How did you do?-
After your run, pick up your “time-slip” and return to your pit area. Relax and compare your times with others, make any needed adjustments and wait for the next call to the lanes. It is sometimes allowed for you to “hot lap” back to the staging lanes for more runs but be sure that it’s allowed before returning to the lanes. If you’re group has not been called to the lanes you will be turned back.

Your time slip will have your vehicle number, the class you’re in (if applicable) and the incremental times of your run as well as other racers’. The first number is your dial-in printed as “R/T”, followed by your 60′ time, 330′ time and finally you’re 660′ time printed as “E.T.”, and your top speed. Another number prints below as “MOV” which shows the mathematical margin-of-victory for your race.

Sign release form before you leave the pit gate. (All persons entering the track must sign release).

Fill out “Tech card” and proceed to “Tech Inspection” area. Have trunk and hood open for inspection and make sure that you have long pants, closed shoes and a sleeved shirt.

If you are under the age of 18 you will need to have a release form signed by your parents and notarized. DTR will keep this on file for the 2011 racing season only. A release needs to be signed each year.

Once you and your vehicle have passed tech you will receive a number on your car and a wristband that must be worn at all times when racing. If a wristband is taken off and given to another person to race all parties involved will be removed from the track for the remainder of the race day. If you are caught a second time you will be removed from the track and not allowed back on track property for the remainder of the track season.

Remember that you can only drive 10 mph on the return road and 5 mph in the pit area. 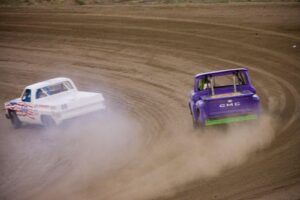 Previous post Special Thanks to ALL of our 2011 Sponsors 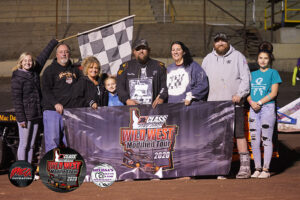 Ladies and gentlemen, at this time we’d like to give a special salute to all our great sponsors. A-OK Self...